Your registration for your FREE Estimate has been received!

Congratulations – you’ve taken an important step towards your dents removed for good!
Please read on for important information.

Your registration for
your FREE Estimate
has been received!

Congratulations –
you’ve taken an important step
towards getting your dents removed for good!

Please read on for
important information. 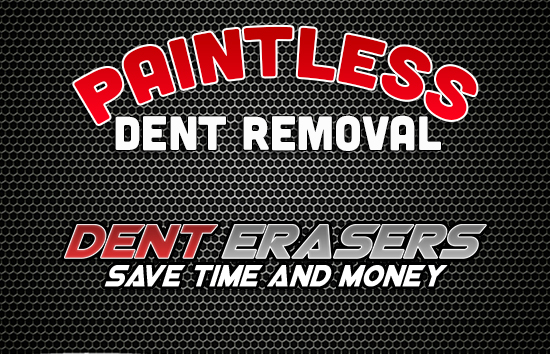 What Are The Benefits Of Paintless Dent Removal?

The most important benefit is quality. This method is the closest you can get to the dent never happening in the first place. With PDR, the original manufacturers finish remains intact. There is no painting involved, no need for body fillers and no need to worry about color-mismatching or risk of overspray on other vehicle areas. Most dents can be removed onsite at your home or business and in less than one hour. Most importantly the vehicles’ resale value is maintained. Cost is also a major benefit of Paintless Dent Removal.

What can I expect to pay for Paintless Dent Removal?

It depends on the size and location of the dent and accessibility. The average dent, like one made by a golf ball, will cost approximately $150 to remove and can be completed in less than one hour. Successive dents on the same vehicle can be performed at a reduced rate. Whatever the damage, PDR consistently costs about 1/3 as much as traditional body shop repairs.

Will The Paint Crack When Dents Are Removed?

Like anything, you get what you pay for. Using an experienced, professional dent removal specialist minimizes the chances of paint cracking. Usually the sharper the dent at the center of the damage, the greater risk of paint cracking resulting from removal of the dent. Dent Erasers technicians will give a thorough inspection of the damage and will inform you of the probability and risks of lifting the dent prior to any work being performed. Remember, Dent Erasers technicians use the most up-to-date methods and techniques to get the perfect finish.

Many dents also come with scratches normally when the cause of the damage is from another car or a static object such as a post. Depending on the damaged area, we are able to remove scratches with our machine polishers and our special polish formulas. If the scratches are major, we will refer you to our trusted mobile paint technician to complete the removal.

What If There Is Paint Damage?

Occasionally, Dent Erasers encounters a vehicle needing paintless dent reemoval work that is just too extensive and needs an auto body repair shop. In this case, our technicians will push the large part of the dent out, saving you money on replacement parts, and refer you to one of our trusted partners to fill in and paint the rest.

This is NOT recommended! There are many products on the market that proclaim to fix annoying dents to your car. Suckerpad applications from local auto supply retailers are the do-it-yourself alternative to getting your car fixed instead of using a professional dent removal specialist.

These suckerpad applications fix around the dent and employ a vacuum pressure to lift the dent to its normal position. This NEVER works! The danger in doing this is the force used can warp the metal and crack the paint leaving your car in a worse condition than when you started. This can end up costing you more to have a dent pro fix the new damage as well as the original damage. Most professionals will tell you that these options in the long run are not a cheap alternative at all.

The Tools Of A Professional Dent Removal Specialist

A professional dent removal specialist uses a collection of precision tools to get a clean and successful finish. As opposed to some home made tools and suction devices on the market, dent specialists require a number of different tools to get the right hold on the bodywork and apply the right kind of pressures to the achieve the right results.

Are Your Technicians Certified?

No. There is currently no certification for Paintless Dent Removal that really has ANY weight to it. Do insurance companies acknowledge a “Certification”? No. Do dealers, body shops, or individuals know of or use a certified PDR Technician? No. Dent Erasers has earned the trust and respect of customers, dealerships, body shops and insurance companies by providing expert Paintless Dent Removal, performed by the best trained technicians in the business.

The world runs on energy — it powers our lives and all of the things in it. Up until quite recently, though, we got the lion’s share of that energy from non-renewable resources that are bad for our environment: things like coal, oil, and natural gas. Solar energy, on the other hand, is a clean and renewable resource that’s been getting a lot more attention as of late.

1. Solar Can Save You
A Lot Of Money.

Conservative estimates put savings at around $50 per month, but if you live in a sunny area or a state where conventional energy is expensive, you can save even more — as much as $30,000 or more over 20 years.

2. Solar Can Actually
Earn You Money.

This is all thanks to SRECs, or solar renewable energy credits. The utility companies in some states will actually pay you for the energy you generate but don’t use, and you can earn some money, usually several hundred dollars or more each year.

3. Solar Panels Can Increase The Value Of Your Home.

Just like an updated kitchen, a solar panel system is a huge selling point of any home. Install panels on your roof, and you could see an increase of $20,000 or more on your property value.

4. There’s A Tax Incentive
With Solar.

If you install a solar panel system on your home, you can deduct 30% of the cost on your taxes that year. That’s substantial!

Most panels come with a 20 or 25 year warranty, and many will work to harness the sun’s energy for much longer than that.

What happens when we run out of fossil fuels? These may be natural resources, but they’re by no meals renewable resources. By using solar energy, you either reduce your dependency on these resources or eliminate it altogether.

This helps the domestic economy by creating jobs and keeping money here rather than sending it overseas.

The price of household electricity is not a fixed number; it varies wildly from state to state, and it can fluctuate throughout the year. This volatility can make it difficult for the average homeowner to budget for utility bills. When you use solar, however, this is no longer a concern.

The sun comes up every day, and even if it’s obscured by clouds during a rainy spell, there’s still enough sunlight to generate energy. With solar, you’ll always have power.

Unlike other forms of energy, solar is sustainable. There are no CO2 emissions, no concerns about a harmful spill, and no negative implications on the environment.